This picture shows children playing soldiers in Leixlip village.[1] Not so many years later and within walking distance a real battle took place with very tragic results. There were many lives lost including a past pupil from our school Anthony O’ Reilly, who was not much more than a boy .We will tell you about daring plans, failed ambushes, violent battle and terrible consequences. This is the story of the forgotten Battle of Pike’s Bridge. 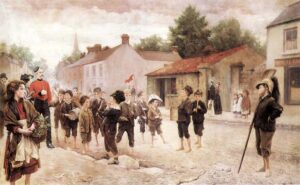 The War of Independence began in 1919. The Irish used surprise attacks on British forces in Ireland, this type of warfare was called ‘guerrilla warfare’. In response the British sent over soldiers known as the Black and Tans and the Auxiliaries. The most violent day was 21st November when in retaliation for the execution of British spies and Auxiliaries, the Black and Tans fired on the crowd in Croke Park killing 14 people. In July 1921 a truce was called. In October 1921 a group, including Michael Collins and Arthur Griffith, went to London to negotiate a treaty. A treaty was signed forming  an Irish Free State made up of 26 counties. Ireland would have its own army, flag and currency but would remain part of the British Empire. TDs would also have to swear allegiance to the British King.

In 1922 a Civil War began between people who supported the Treaty, led by Michael Collins and those who opposed it led by Eamon De Valera. The events in our essay took place in the  villages of Leixlip and Celbridge during this Civil War.[2]

The anti-treaty column in our area was led by Patrick Mullaney, a National School teacher in Leixlip.  The day after the Civil War began, Mullaney was arrested and imprisoned in the Curragh. He escaped in August and took command of several brigades in the Meath and Kildare areas.[3]

Mullaney and his men blew up railway lines, bridges and cut telegraph wires so that messages couldn’t pass through. Of course they needed funding to get guns so they got it from sympathisers, collections, and holdups.  They robbed  post offices, mail vans and even shops. They burnt signal cabins in Leixlip, attacked Lucan Barracks, and cut telephone wires. They actually attacked and damaged bridges that they would have used themselves- Celbridge and Louisa Bridge. They attacked Celbridge Workhouse and  later set it on fire. They robbed a postman of his stamps and money.[4]  They left a trail of destruction throughout Kildare.

Baldonnel was an Irish Free State Army base which held aeroplanes, cars and ammunition. It was a big target for the anti-treaty side. Mullaney had a heroic plan to take over Baldonnel, steal some planes and bomb Leinster House. He had about 30 Free State soldiers from Baldonnel working with him.  According to local historian Jim Doyle, our past pupil Anthony O’Reilly played an important role in this plan, joining the Free State Army to go undercover to see what was going on.  It was planned to get help from Kildare, Meath and Dublin but this did not happen

It was called off by Dublin Brigade officer Todd Andrews. It was also called off a second time by Andrews. The plan for the third attempt was to steal arms and vehicles and bomb Beggars Bush barracks. Anthony O’Reilly was ready to open the gate to let them in and two pilots were ready to steal two planes but the reinforcements from Dublin didn’t arrive so yet again Todd Andrews called it off…. Again!!  Mullaney was furious and so was O’Reilly. 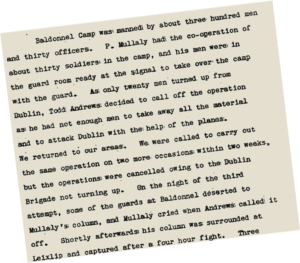 On his way out O’Reilly stole a Lewis machine gun. [ 7]

Five of the men in Mullaney’s column were from Celbridge. They were Thomas Cardwell, John Dempsey, Thomas Kealy, Charles O’ Connor and Anthony O’ Reilly. We found their details in the 1911 census and also in old roll books from our school. 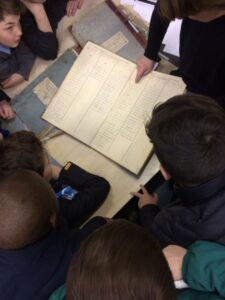 Anthony O’ Reilly was the only one of these men executed and we wanted to learn more about him. Local historian Jim Doyle has done extensive research on O’ Reilly and he came to speak to us.

Anthony O’Reilly was born on 13th June 1902. He was born in Celbridge Workhouse. His mother’s name was Bridget O’Reilly. He had a twin sister Julia Mary who died aged one due to convulsions. [8]

He was fostered by the Mullins family.[9] 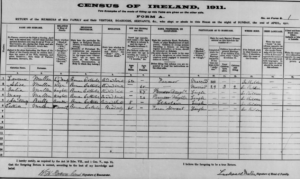 He went to the Abbey National School in 1911. We can see from the roll he had regular attendance which could mean good health. The confirmation name he chose was Desmond.[10] 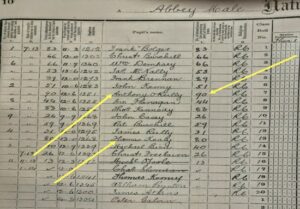 According to Jim Doyle, local oral accounts tell us that Anthony lived with his mother as he grew older and his nickname was the “County Boy”.

The Military archives provided this information: 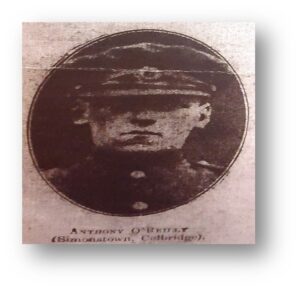 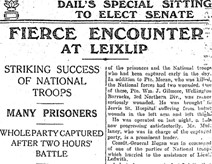 On the 1st December 1922 Mulanney’s column stole a car  and took over Grangewilliam House. They positioned themselves in the nearby Graveyard , as it was a good vantage point to see  Pike’s Bridge, the road, canal and railway .Meanwhile a Free State army lorry carrying supplies from Lucan to Maynooth broke down on the road leading to Pike’s Bridge. While trying to fix the truck, they came under heavy fire from Mullaney’s column. The soldiers ran towards the canal seeking cover. They then found themselves being fired at by a Thompson gun and they ran over the bridge. Mullaney’s column seeing this, hopped in the stolen car to ambush them. Two of the men from the lorry were forced to surrender, while the other soldier got away.[14]

“We took the best cover we could get… I then saw armed men with rifles. I and two of my companions were surrounded. One of us escaped. I and my companion Sergeant Montgomery were made prisoners” [15]

Some reports of this battle claim that the shooting came from between the graveyard and the house itself but after our trip to the Grangewilliam we found that it would be practically impossible for that to have happened as it was too far away. 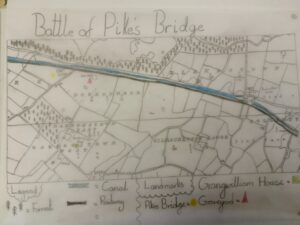 At around 13:45 Ledwith, with 12 soldiers he had encountered on the Dublin Train, headed towards Grangewilliam.

They reached Grangewilliam and were immediately put under heavy fire. Two men were separated from the group and one of them, Private Joseph Moran, was shot dead. An hour later reinforcements arrived and surrounded Grangewilliam. Mullaney was forced to flee towards Ballygoran where at around 16:00 they eventually surrendered. [16]

It was like a chapter from a Red Indian novel. We crept along under cover until we suddenly saw about twenty men, three of them in uniform…We hesitated…they opened fire…We replied of course and it was all over inside ten minutes.[17]

The column was captured, including Anthony O’Reilly. They all knew their upcoming fate.  Arms and ammunition including 21 rifles, a Lewis machine gun, a Thompson submachine gun and  revolvers were recovered.

On 27th September 1922, the Provisional Government granted itself emergency powers so that any person charged with taking up arms against the state or even possessing arms without permission could be tried in a military court and face the death penalty.[19]

“Treachery on the 1st December 1922 in that they at Leixlip assisted certain armed persons in using force against the National troops.”

This was the first time men from the National Army were executed for deserting  and was  a warning to other men.

The men were executed on 9th January 1923 by firing squad. They were buried in Kilmainham Gaol.[20]

The rest of the column escaped execution and were released in 1924. Mullaney was fired from his school but the parents organised a strike in protest and he got his job back. He later returned to Mayo.[21]

Meanwhile around the world

Around this time, many interesting things were happening. We noticed alongside reports on the Leixlip Battle in The Irish Times of December 1922 there was a story about Howard Carter discovering the tomb of Tutankhamun in Egypt. We thought it was strange that we all knew so much about that and so little about events that took place on our doorstep! 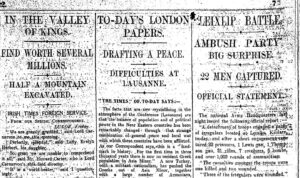 Many  World War II leaders were coming to power.

The strangest fact in 1922 was that the longest attack of hiccups begins: Charlie Osborne gets the hiccups and continues for 68 years, he dies 11 months after it stops. [25] 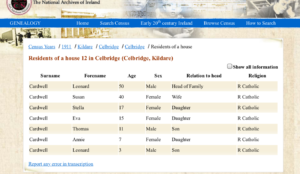 Less than a week after Thomas Cardwell was arrested for his part in the battle, his family once again were indirectly victims of the Civil War. On 7th December 1922 in Celbridge,  Annie Cardwell  (18), was tragically shot by a lad named Patrick Brady. The incident took place in the Cardwell household when Annie and Patrick were messing around the house with a gun. You see, the Cardwell house was used as an arsenal so there would be some guns locked up and some lying around the house. [27]

“We were pointing the gun at each other and clicking. I put the rifle down behind the door of the room, and Annie and her brother went into the kitchen. When they came back I said I would give her a fright, and I took up the rifle and pointed it at her and it went off. I was thunderstruck when it went off. We were always on the best of terms, and there were no angry words or dispute between us prior to the rifle going off. I immediately went for the priest and doctor. No one regrets the incident as much as I do” [28]

Joseph Moran was from Kilcock He was shot dead during the battle. He was fired on from  Grangewilliam house.

“Moran was shot about an inch under the eye and the exit wound was found, large and jagged in the back of his neck. The bullet travelled in a downward, backward and outward direction.” [30]

Return of the Bodies

After the Civil War, De Valera put pressure on the government to exhume the bodies of the  executed men. On  31st October 1924  Anthony O’Reilly was buried in Donaghcomper, Celbridge, alongside the Mullin’s family who had fostered him as a child. About 3,000 people attended.[32]

This was a huge crowd for the burial of an orphan in a small village with poor transport links.

“Business was completely suspended in Celbridge, shops were shuttered and windows were  blinded during the period of the interment…. IRA forces were present under Commandant P. Mullaney….” [33]

On  17th February 2017 our History Squad went on a field trip looking at locations that featured in our essay. Our first stop was the Workhouse where Anthony O’ Reilly was born. Next  was Louisa Bridge, blown up by the Leixlip Column. Then we looked at Lidl because one report said the ambushed troops   were brought to Walsh’s pub which was on that site.[34] Then we saw the canal and Pike’s Bridge where the battle took place.

We went under the bridge. We thought that it was amazing how little the scene had changed in nearly 100 years. Then we went to Grangewilliam House.

We went into the medieval graveyard in the grounds and we think that’s where the first shots were fired. 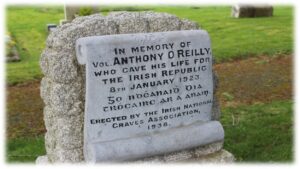 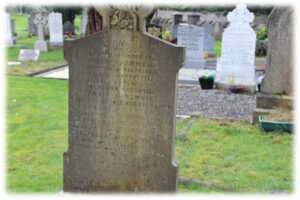 Our last stop was the graveyard in Celbridge. We found Anthony O Reilly’s grave and the Cardwell’s plot. It was great day and helped us to know where and how everything happened.

We  finish  with a painting called Allegory. It tells us about the Civil War and our story in symbols. We can see destruction, death, despair and disappointment. The Battle of Pike’s Bridge led to the loss of seven young lives. The total death count in The Civil War  has been estimated as 4,000 with  77 executed.[35] Almost a century later people are only beginning to talk about that era. The time has come to talk about all the Forgotten Battle. [36]