How to Survive a War 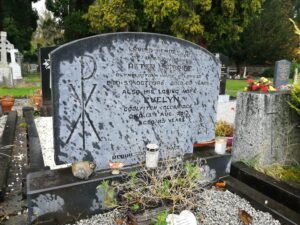 For about 26 years Peter McBride of the Hatch Road has been a familiar figure in Celbridge. A member of a long-living family from Omagh, Co. Tyrone, he is now a ripe age but looks and acts like a young man.  He cannot ascribe his age and condition to having always led a quiet life, for at the age of 21 in 1916 he joined the British Army and saw service in terrible conditions then existing in France.

By the end of March, 1918, he has been then about 16 months in France facing a landscape of shell-holes and shattered trenches, where hundreds or thousands of men had died terrible deaths.  He had so far escape injury but was dead tired from the effects of marching, little sleep and the ever-present dread of being blown to bits by the German artillery.

At that stage of the ward the Germans had advanced about 50 miles and the British were under great pressure all along the line.  On one occasion Peter and a companion were sent up to the front to see where the new German line lay – they did not find the line but in a shell-hole they found four of their own men gloriously drunk on rum and blissfully ignorant about everything.

Later he found himself stationed at nightfall in a shallow trench in which he proceeded to scoop out a hole into which he could crawl for safely.  He was asked to move but refused and soon dropped off to sleep. As an occasional shell burst near by, he dreamt he was hit by a hammer and awoke to find that a piece of shrapnel had shattered his left arm.  Luckily, however, he was not loosing any blood.  A companion therefore placed his wounded arm in a sling and directed him to walk to the rear to avoid capture.

Fortunately the weather was mild as he walked alone in the area not familiar to him.  He met a French soldier who directed him to a dressing station which consisted of the cellar of a ruined building.  In there he was given an injection which probably saved his life and he spent the rest of the night lying on the stone floor among a group of French soldiers.

Next day he and a badly wounded German were placed in a van that acted as an ambulance (it had been captured by the Germans and recaptured by the French) and he was taken for a long ride over rough roads further to the rear.  Little comfort awaited him there.  He was placed on a stretcher in a large field with thousands of other unfortunates like himself.  There is lay all night and all the next day getting two mugs of tea during the period.  At this time the British Medical Service were badly disorganized by German attacks.

Finally he was taken to a tent and with three candles giving uncertain light his arm was amputated.  He was then placed in a Red Cross train and in what seemed like wonderful comfort was taken to Rouen.  He spent ten days there in a comfortable bed being looked after by nurse, who to him, coming from the front line, seemed like people from another planet.  He needed all the attention they could give him for the effects of his wound and the effects of having lain so long in one position left him very sore and restless.

His next move was to a military hospital in Lincoln in England which was followed by a period of convalescence in Gainsborough in Lincolnshire. Here, life was pleasant. The war was being won and the English people showered gratitude on their soldiers. They were allowed free into cinemas and the theatres and restaurants and it was not unusual to find them being cheered and clapped when they appeared in uniform in public.

Peter McBride returned to his home near Omagh, Co. Tyrone, for Christmas, 1918. His brother, who ad been held as a prisoner of war in Germany, returned also in the same week.

Ireland then received such returned soldiers with something less than enthusiasm. The 1916 rebellion, the execution of the rebel leaders and the threat of conscription had placed a huge barrier between the English King’s troops and the majority of the Irish people.

Peter McBride later (in December, 1959) completed his career in the Irish Civil Service. His missing arm served to remind him and others of the horrors of the Great War that he had survived. His prayer-book, that he had been given by an army chaplain, was another reminder as the piece of shrapnel had torn a neat gap in the edge of the prayer-book before going on to shatter his arm. Perhaps in doing this it had been slightly deflected so that it missed the vital blood vessels and so saved his life.